i have a friend who's a way more consistent blogger than me, a fantastic writer and a very good human, and he has just involved me in what appears to be a game of blog tag. which requires me to write 8 things about myself. (you can read his awesome blog at www.grammarpiano.blogspot.com)

i am a very inconsistent blogger, and i may not have any readers, but i know that you don't shirk a game of tag. even if it is a weird internet version.

this will actually give me the opportunity to write down some things i've been thinking about trying to post about here the past couple of weeks:

1)i went to hear the writer stephanie grant read from her new novel _the map of ireland_ the other night. its a pretty interesting book narrated from the perspective of a white girl growing up in the projects in south boston during the anti-busing protests of the mid-1970s. grant is very articulate about the history piece of the novel, she says quite clearly that part of her intention in writing the book was trying to set a girl's story in specific against the backdrop of historical events-- that usually its only boys' stories that get placed in historical context, that girls' stories usually get placed only in the realm of the private, the domestic. which is right, but i've never thought about it that way before. the book is a really interesting approach to trying to understand the psychology of racism. her main character is not only a very sympathetic baby dyke, she's also really clearly rendered as a person who's struggling to understand what's going on in her family, her town, and her other contexts. and yet: she's the sort of person who, if we read about her crimes in the newspaper, we would probably just dismiss as a typically violent racist. the fact that she's from southie, the fact that southie's such an iconic working class irish neighborhood might make folks dismiss her even more easily. and the fact that it took place during this historical event that we have all learned very little about but which we know we want to condemn-- well that makes it even more easy to dismiss this girl. which makes me think: sometimes, i think, knowing a little historical information actually ENABLES, sometimes, a quick, unthinking dismissal of human complexity.

anyhow, stephanie grant does a very interesting job of trying to understand the various layers of this moment in US history and in one girl's life. and i thought: hmmm.

2)woah, that number 1 was long. i wont keep that up. number 2 is this: great small works' spaghetti dinners are very important. to me. to community. to public tellings of history. check out great small works, if you're interested, at www.greatsmallworks.org. at last saturday's spaghetti dinner, at judson church, a few of the regulars did a metaphorical performance about the denying of tenure of jon bell, the great puppet historian. and in the midst of this piece, jon bell himself gives a lecture about the historical and theoretical uses of objects to tell stories, and it was beautiful and accompanied by an evocative video edited by jenny romaine. it made me want to sit down and eat the air for hours so i could possess all of the feeling and ideas i was having inside me forever.

3)i will begin a new job at SUNY new paltz in the fall.

4)thus i need to buy a car. thoughts on the connections between buying a car and history: you need to know a lot about the history of a vehicle before you purchase it. also you can never know for sure if you are getting the full story, and thus you have to just hope that the vehicle has had a calm history, and that its current human is narrating that story accurately enough. enough that you don't get screwed. history, here, becomes financially consequential. also you want a car that was produced at exactly the right time in history: people tell me that if youre going to buy a volvo, don't buy one that was made after '96. cause thats when they changed the engine they were using. & its more expensive to pay for a post-96 trained mechanic. or if you want to buy a hybrid, you wont necessarily know how its engine holds up over the long term-- because it hasn't been around long enough. history and cars: a potentially rich subject. who'da thunk it.

5)i also have to rent a place upstate. i will refrain from talking about history and rentals in the hudson valley. don't worry. i will not begin blogging about the revolutionary war and whether george washington slept in the room that i'll be renting.

6)i am looking forward to seeing "traces of the trade: stories of the deep north"-- a film that was produced by a new acquaintance of mine, elizabeth delude-dix. its about how northern families were enriched by and helped shape, deeply, the african slave trade. www.tracesofthetrade.org.

7)oh! i saw michel gondry's new film the other night, "be kind, rewind." a very good film. best line in it for our purposes (spoken by mia farrow, ps): "history belongs to us! we can change it if we want to!" (then she and her pals do.)

phews, there. now i'm going to go vacuum up the history of my cat's hair that's taking over the apartment.
Posted by ::rachel mattson:: at 4:14 PM 1 comment: 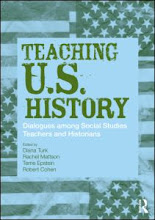 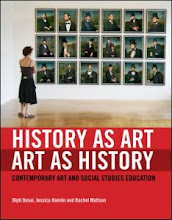